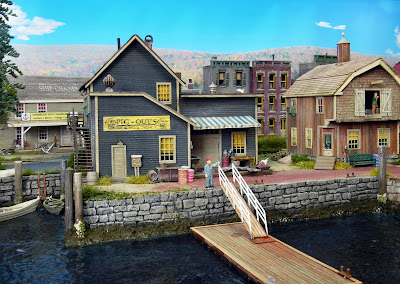 I've posted a few photos taken at the start of construction of the Sea Port Model Works display. But there's so much other stuff going on here I may never get to post the whole construction sequence. So I'm jumping to the finished display to show you this photo. The structures are modified kits. The seawall a plaster casting and the water is built on a sheet of Gator Board.
Posted by Dave at 6:04 AM 1 comment: 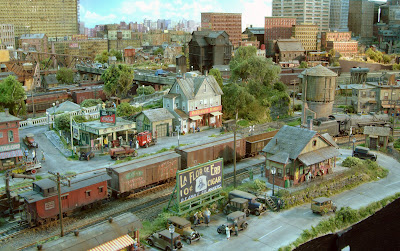 Almost 10 years ago I was hired by Model Railroader magazine to photograph George Sellios' Franklin & South Manchester model railroad. This was one of the first digital images of the layout that I took.
I just found this image on a CD - a similar shot was used as part of the story.
All in all I recollect photography the F&SM about 8 times for different articles in MR and Great Model Railroads.
Posted by Dave at 10:41 AM No comments:

I visited the Nantucket Railroad display yesterday (in the Whaling Museum in Nantucket, Mass.) to change the engines on the display. The display is a 28' long model of the Nantucket Railroad as it looked in 1910.
Since it was built in 2009 the display has been running several On30 Bachmann Forney's with sound. I selected this engine type because it looked similar to the 3-foot Mason Bogey-type engine that the railroad used. The Railroad also used an American-type engine but the models available do not, as yet, have sound. The Bachmann Forney's had a problem keeping the trailing trucks on the rail even when running on straight track.
I replaced the Forneys with the new Bachmann 0-4-2 Porter with sound. I bought two of these engines and painted and lettered them for Nantucket.
Yesterday's trial was a success. The engines pulled two passenger cars back and forth without hesitation, and performed all the stop and start tricks I built into the DC circuitry. The sound from these engine is loud enough to get attention in a crowded room and sounds close to real.
All in all it was a successful day. It'll be interesting to see how long these engines last in continuous service.
Posted by Dave at 5:43 AM 1 comment: 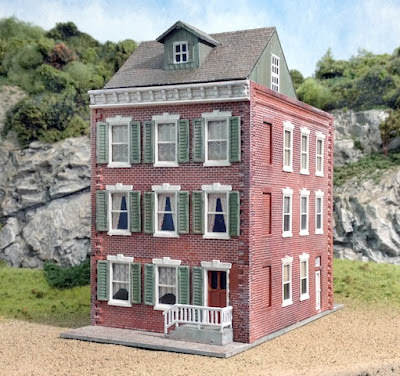 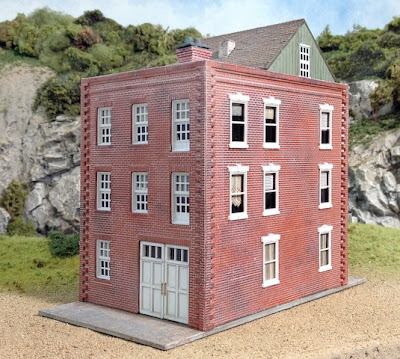 There's something very satisfying about building a plastic kit. You start and finish in a reasonable amount of time and you get a nice structure to show for your efforts. This is an IHC Society Hill Townhouse kit that was offered more than 20 years ago. It still may be available from Wm K. Walther's, I haven't checked.
This basic building was used to make 5 or 6 other IHC kits. They changed the lower part of the front of the building, added different windows and window trim, and added and subtracted details from the roof. I'll bet over the years I've built every one of these.
I primed and painted the parts while they were still on the sprue. After assembly I weathered the kit using a very weak burnt umber wash. The total construction time was about 6 hours, not counting paint drying time.
Posted by Dave at 9:19 AM No comments: 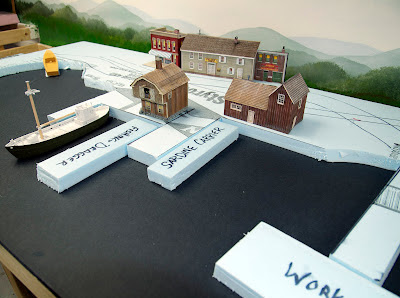 I'm back from vacation. A little R & R in the sun goes a long way.
Here's the Sea Port display again. When I was designing the water space I needed to allow room for the boats that Sea Port now offers and boats that may come in the future. I got the hull dimensions and cut a 1" foam rectangle for each hull. Some were a little oversized but it is okay since all I really needed was "place holders."
I had a few structures on hand and placed them here and there to see how they looked and to see how much space they would fill.
The background is painted on a 32' long curved background that occupies one wall of my workshop. It's been painted many different times depending upon the project - this background was used in my video "EASY SCENERY."
Posted by Dave at 7:57 AM No comments: