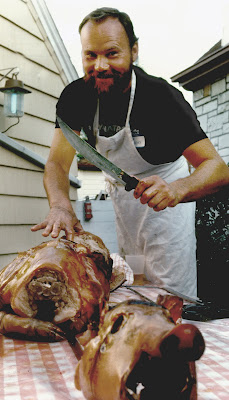 I love cooking whole hogs. It started over 30 years ago when Bob Hayden decided to host a pig roast for Kalmbach Publishing (publisher of Model Railroader and Trains magazines and my Scenery book) employees.

He bought a 125 pound pig and asked me to cook it. We mounted it on a pole and rented an electric rotisserie. We put the set-up about 2 feet off the ground and built a charcoal fire on either side of the pig. I sat and watched the pig for 7 hours until it was done. I was also done, I'd been drinking beer while watching the pig cook.

We carved it, sauced it and served it with a keg of beer and a dozen pot-luck sides people brought to the party. It was a grand time. The only thing left in the morning was the skull, stripped of meat, staring at me from the kitchen sink. I've cooked many pigs since then using all types of contraptions and pits dug in the ground. They all worked out great.

This year I decided to get serious and bought a La Caja China or Chinese Pig Box. This is a plywood box lined with aluminum and has an aluminum lid to hold the charcoal. The pig bakes in the box. It's almost foolproof.

You season the pig (injecting the rubbing,) put it in the box, put the lid on, cover the lid with charcoal and let it cook for 3 or so hours. At that time you remove the lid and turn the pig, replace the lid and let the skin crisp for another hour. Easy Peasy!

The results are a perfectly cooked pig, ready to pull, sauce and eat. 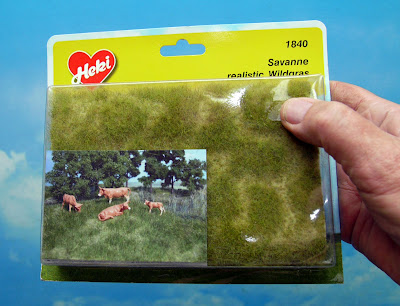 In the package there's a large sheet of standing grass on a plastic backing. This is the same type of grass you'd get from the Heki Flock Star static grass applicator only the Wildgrass is ready to use.

Just peel a clump of grass from the backing, put a drop of white glue on the back and push it into the scenery. After the glue dries you have a patch of grass that looks like it just grew there.