This past week I went back to the Nantucket Whaling Museum in Nantucket, Mass. to remove the snow and lights I'd placed there in November to get the display ready for Christmas.
The display it's a 28' by 4' model of the Nantucket RR as it looked in 1910. The railroad was a 3-foot gauge commuter line that moved tourists from the ferry dock in Nantucket Town to the resort hotels in Surfside and Sconsett. About a 17 mile trip each way.
Here, on the On30 display of the railroad, engine number two, a Mason-Bogey type, is hauling a passenger car and freight van east toward Sconsett while crossing the wooden bridge over Goose Pond.
The 31' long background was made in Photoshop using pictures I took while on Nantucket, pictures from Canada and photos from the Nantucket Historical Association collection - all melded together to provide an interesting background seascape.
It'll be open for business in May if you'd like to visit.
Posted by Dave at 4:22 PM No comments: 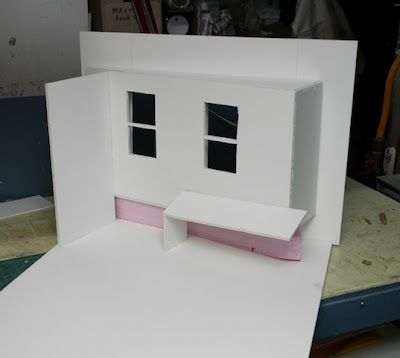 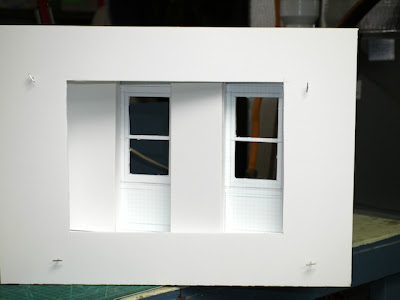 This is a mock-up of a front of a diorama I'm thinking of building. The windows are 1" scale and the room will be paneled like you see in colonial bedrooms. Looking out the window you'll see the effects of the great Nantucket fire of July 13th 1846. I'm going to build Main Street and India Streets in perspective showing the fire progressing up the street.

If you Google the Nantucket fire of 1846 you'll get a few hits but they all paraphrase an account given by an eye witness at a lecture in 1901. There are no pictures, it's too early in history and there's one newspaper etching which is not helpful.

There is a map, which is helpful. Ninety percent of downtown Nantucket was destroyed and 800 people were left homeless. Food and building materials were brought from the mainland when the folks there heard about the tragedy.

From the Mass. News Google search "a fire began at 11:00PM in a hat store on Nantucket's Main Street. In no time, it raced through town, consuming everything in its path. Barrels of whale oil were stored on the wharves; when the fire reached them, they burst into flames. The burning oil flowed into the water, creating what one man described as "a sea of fire." Seven hours later most of the town's commercial area lay in ashes. Some 250 buildings had been destroyed — almost all the markets and shops, seven factories that processed whale oil, a dozen warehouses, three of the town's four wharves, and many homes. The fire had lasting consequences: it contributed to the demise of Nantucket as the world capital of the whaling industry."

I'm going to try to build a model that will show-off the fire. Now I have to figure out how to make "cold" fire. 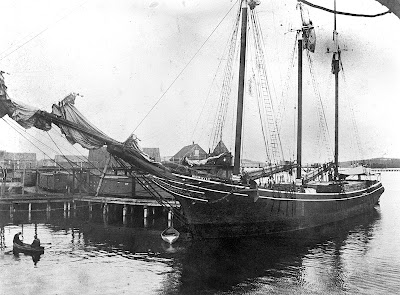 I was looking through photos this morning and this view of the dock at Wiscasset, Maine jumped out at me. The coastal lighter is the Horatio and if you look close you can see the deck is piled with lumber. The 2-ft. WW&F boxcars are in the background and are probably ready to unload more wood for the Horatio to take to Boston or NYC.
As I read the history of these coastal freighters it was clear that it was easy to get a crew for a lumber ship (in a storm you could ride the lashed together wood pile like a raft until rescued) but impossible to find anybody willing to crew on a ship carrying stone.
Those familiar with the Wiscasset, Maine area may remember the Hesper and the Luther Little, two coastal lighters that were left to rot on a mussel bed in the Sheepscot River. They were a photographer's delight for 50 years. They were finally removed, I think in the 1980's. They became a place where the local kids liked to party.
Posted by Dave at 5:22 AM 1 comment: 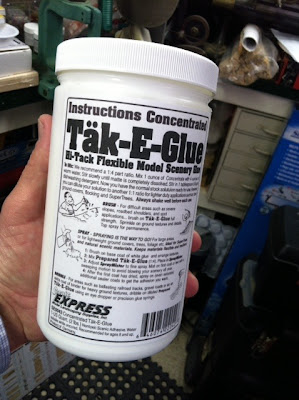 Tak-E-Glue
Here's the new scenery and wood glue from Scenic Express. It's from Europe and combines the best features of white glue and liquid latex.
It's made for most scenery applications and is water soluble. Hal Reynolds of Atlantic Scale Models has been experimenting with it.
He says you can dilute this with water and dip the Scenic Express SuperTrees in it. You need several dipping and drying cycles to make them flexible while keeping that fine branch structure. I need to buy some to try it out!
Posted by Dave at 10:47 AM No comments:

The display itself was built on a 6' long by 30" wide 1" by 3" pine frame. This was covered with a sheet of 1/2" Gator board. The Gator board is the water surface.
On top of this is a sheet of 1" blue foam which has been cut-out for the land and dock areas. The backdrop is a piece of Wacky Wood - a 3/8" Luon plywood that's made to be flexible and bend easily. I mounted it here using 24" radius corners. It's one foot high.
I added a length of Walther's code 83 track so a small GE 44-tonner could run back and forth. I used a DC circuit which required that the ends of the track be isolated with diodes. The engine runs into a dead end the current is reversed and the engine backs out and runs to the other end. It runs into a dead section and stops. When the current is reversed the whole process starts again. The train controller is a cheap Bachmann transformer that was sold with their Big Hauler G-gauge train sets.
I put a Walther's Lighthouse in the left corner to see how a lighthouse would look in this location. It will be replaced with the Point Sparrow light. An HO kit that was offered by Precision Laser Craft years ago.
Posted by Dave at 5:55 AM No comments: 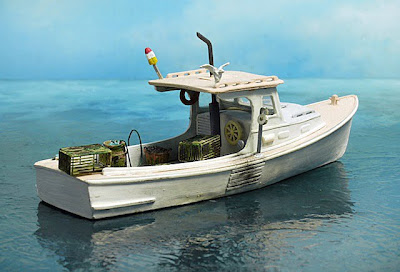 This little guy started it all. An HO scale lobster boat. It's almost the same shape and size of the boat I owned and worked on for 41 years. The boat model is made by Sea Port Model Works.
I met the owner of Sea Port at a train show and after several discussions he asked me to build him a display that he could bring to shows to display his boat kits and built-up models.
I went home and thought about it for a while.
What will follow it is how it all came together.
Stay tuned.
Posted by Dave at 5:56 PM 3 comments: