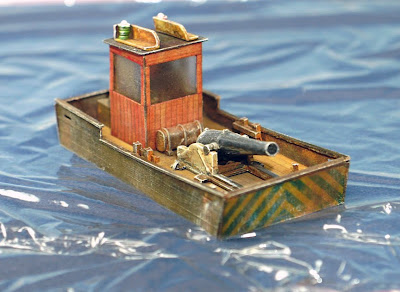 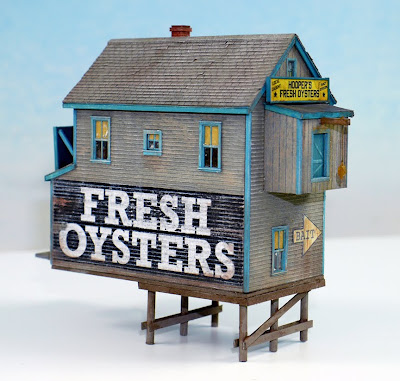 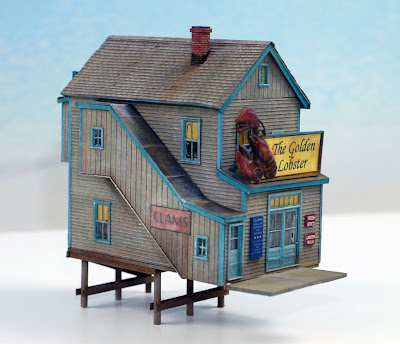 Work continues on the podcast layout. I've finished three new Fos Scale Limited structure kits - www.foslimited.com/.
Here's Fos's HO Hooper Oyster Company kit. I've changed the sign on the front to make it The Golden Lobster. The plastic lobster on the sign came from the top of a swizzle stick I picked up at the bar at Anthony's Pier 4 in Boston. The large oyster sign is included with the kit. I've set the building half on and half off the pilings - the front half will be on the street.
The little barge kit comes with Hooper's Oyster. I built it per the instruction but set a model cannon on the deck just for fun. Several folks wrote and said "that's not prototypical!" You think? I told them the barge uses the cannon to go in reverse...
Posted by Dave at 11:36 AM 1 comment: 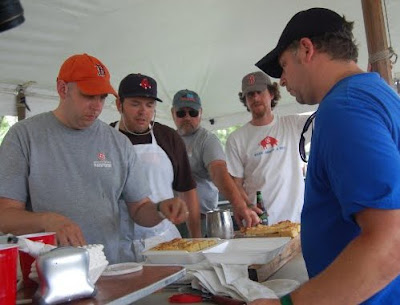 Our BBQ team, iQue, had a great weekend. We're now the Massachusetts State Champions having prevailed over 41 other teams, one from as far away as Chicago. The win came out of the blue. We had a couple of calls in ribs and pork shoulder but nothing that would lead us to believe we had enough points to beat several other strong contenders. We had the points and won, and it was great! A nice trophy and even nicer cash made for a great contest.

Now the team is off to Kansas City to cook the American Royal. Over 600 teams compete to see who's got the best BBQ on the planet. If you'd like to check out how we prepare our pork shoulders for Royal competition click this link - http://www.youtube.com/watch?v=6XMjN0I7wD8 - there's 2 parts to this video. Check out part 2 to see how we did.

This link shows our brisket win at the Royal, against 500 teams - http://www.youtube.com/watch?v=8OiTlhlqNJY

At the end of October we travel to Lynchburg, TN for the Jack Daniels Invitational. It's the world series of BBQ - the 50 best teams in America go head to head. We've had very good luck at both contests and hope to continue.

My thanks to the Harpoon Brewery in Boston for providing sponsorship and great beer - http://www.harpoonbrewery.com/ 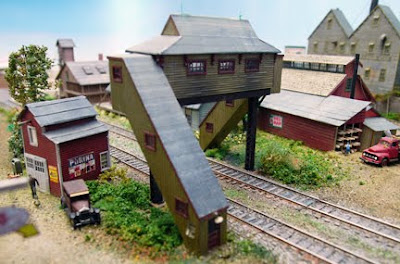 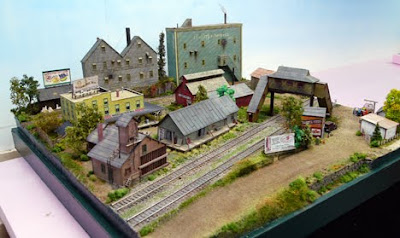 Wow! It's been way too many weeks since I added anything new to this blog. I took a summer hiatus and now with fall rapidly approaching it's time to get back work.
The Narrow Gauge Convention is going strong in Colorado Springs and this year I decided to stay home. I did get a chance to participate in a small way by building a display for Jimmy Deignan to show off his new line of laser cut kits - www.craftsmankits.com
Jimmy gave me all these built-up kits on small diorama bases. I removed the bases and saved all the little details. The buildings were arranged on a 30" by 32" sheet of reinforced foam core board (the dimensions were determined by the size of the available floor space in Jimmy's van.) I mounted the structures on 1" pink Styrofoam and scenicked around them. It's kind of crowded but I got everything to fit in a small space.
Posted by Dave at 7:31 AM No comments: