As 2009 rolls to the end I want to say THANK YOU to all my on-line friends. Thanks to all for visiting this site, buying books and DVDs, and asking many scenery questions. It's been a wonderful year!

In 2010 I hope to improve the quantity and quality of information provided here. Stay tuned, it's going to be another great year! 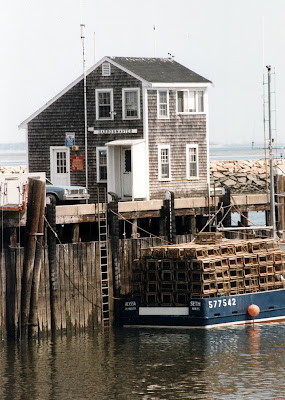 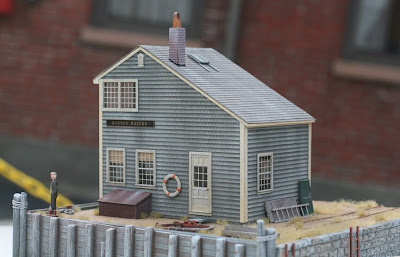 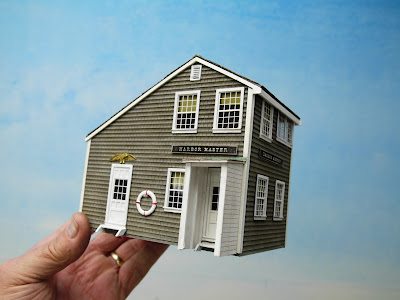 For almost 41 years I had a part time lobster business on the coast of Massachusetts just north of Boston. During that period I owned four lobster boats. My last boat was custom-built for me by General Marine in Biddeford, Maine.

In my travels looking at other boats and builders I spent several weeks in Nova Scotia. I took this photo of a Harbor Master's Office about 1979. I don't remember where. The picture was placed in a box of other waterfront photos until I discovered it again last October when I showed it to Hal Reynolds of Atlantic Scale Modelers .

He liked the photo, so I drew the "plans" on graph paper. The plans were really just a sketch showing the length and width. The size and proportions were determined by using a know window size, and by counting the rows of 5" by 5" cedar shingles on the building sides. This was the system we used very effectively when we built the Nantucket Railroad display for the Nantucket Historical Association at the Whaling Museum in Nantucket, Massachusetts.

Hal took my sketches and laser-cut the office in O scale. He used the windows we created for the Nantucket structures. They were a bit large but looked good.

Hal sent me the first cutting for comment. The photo, with my hand in it, was the first trial run of the kit. Hal cut a second kit, built it, and put it on a waterfront display as seen in the next photo. I put a light in the Harbor Master's office as you can see in the close-up photo. I used printed nautical maps to decorate in interior walls.

Hal decided to go ahead and produce a kit of this structure. It's cut from Northeastern Scale basswood and has a footprint of 5.5” x 3.5” and is 5” tall. The shingles on the sides and roof are laser cut into the bass wood. The look real! All you have to do is paint them. The doors and windows are laser cut and have window glazing included. The chimney and life saving rings are included, and there's illustrated instructions.

Hal says he expects to have the kits ready to ship by early January 2010. The price is $79.95 plus postage - a bargain and a fine addition to your O scale waterfront!

The future is now.

The more I look around the Internet and see how model railroaders are embracing the podcast and video technologies the more I think this is going to be the greatest informational, teaching and entertainment tool ever devised. You can already download movies and TV shows and watch them when it's convenient so why not model railroad information?

It started with the Scotty Mason Show. This was the first model railroad/structure kit show on the Internet. Jimmy Deignan put the show on iTunes as a free download and the number of listeners just exploded.

If the Scotty Mason Show could afford the band width we could make a video podcast. The one I always mention as the one we should emulate is TWiT - This Week in Technology. It is polished, professional and informative. The band width is still expensive without a willing sponsor.

Our podcast was followed by Ryan Andersen's weekly Model Railcast Show. I was interviewed for this show last week. Show #91. Ryan does an interesting show because it's main thrust is how to get started in model railroading. A topic that's often overlooked by experienced modelers.

Joe Fugate was the pioneer in how-to-do-it video downloads at his Siskiyou Line web site. On this site you can download his instructional videos or buy his DV's. He offers them in several formats, they're inexpensive and the site is very user-friendly.

Joe is also responsible for the free, quarterly Model Railroad Hobbyist eZine. This a a real model railroad magazine that's free to download from the web site. The best part is the great video segments showing you how to perform a particular task. Good stuff, and did I say it's free! 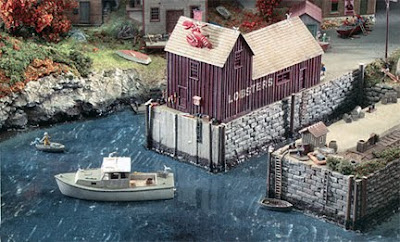 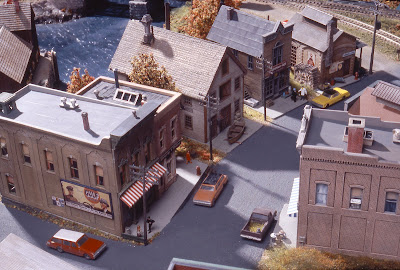 I just uncovered these photos from the "Lobster Cove" project I built for the folks who owned the Franklin Mint back in the mid 1990's. This is a 3' by 5' HO model railroad. A loop of track and two sidings with a bridge, tunnel, waterfront, and a New England village.

It was sold through the American Express credit card mailing list. You could own a ready-built HO Lobster Cove for eight credit card payments. The White Glove folks would deliver it, set it up and run the trains to make sure it worked.

My job was to build the layout for the brochure photography and then build casting masters so all the pieces could be sent to China and duplicated. I did it. They duplicated the layout in China I was told. The project was dropped before it really got started because not enough of these layouts were sold.

The Lobster Cove layout eventually became the basis for the model railroad that appeared in the movie The Love Letter. Same dimensions, scenery and track plan, only the structures were different.

This would be a nice little HO model railroad project for someone who wants a small, highly detailed railroad. I don't have plans or other photos, so you're on your own... 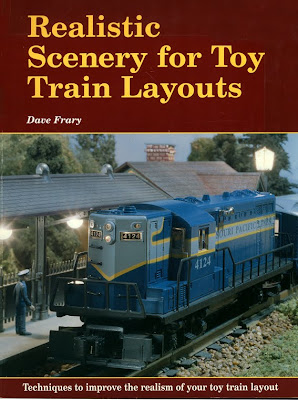 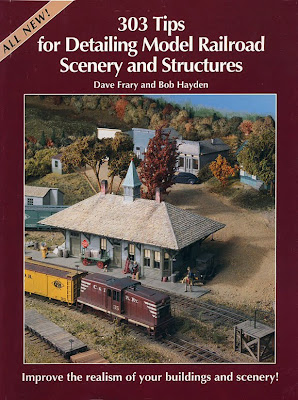 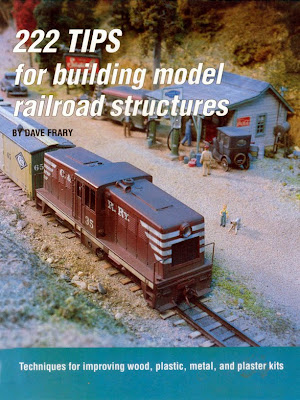 I hope you noticed the eBooks for sale on the my main page. I've taken my two TIPS books and the Toy Train Scenery book and scanned every page. The information in the books is as valid today as it was ten years ago when they were published.

I chose a resolution high enough so that the photos look good and the text can be enlarged several times and still be readable. It was a big challenge and I experimented with dozens of scans to get the dpi just right.

I also needed a file size that was small enough so that modelers with a high speed connection could download the eBooks in a matter of minutes. If you still have a dial-up connection I recommend ordering your book or books on CD. The instructions are included with each book.

The TIPS books are an accumulation of 50 years of craftsman structure and scenery building. Realistic Scenery for Toy Train Layouts explains the simple steps for making good looking scenery. You'll love this eBook when you pull out the train set at Christmas or want a simple set-up for the kids to enjoy. Whether you're a beginner or an expert you'll benefit from reading these classics.

Download a book and check it out. There's a lot of good information here and I've micro-priced the ebooks so that everyone can enjoy them. 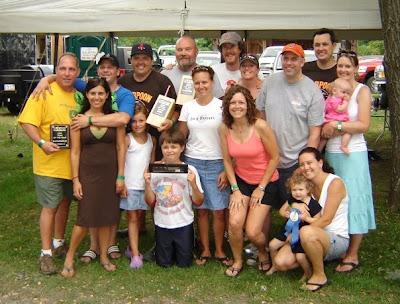 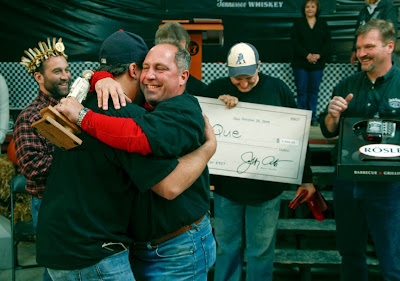 On October 24th the iQue BBQ team won Grand Champion at the Jack Daniels Invitational BBQ Competition in Lynchburg Tennessee. Eighty teams were invited from around the world to see who cooks the best BBQ. iQue has been invited for the past 8 years. Here's how the team did:

I've only been with the team since 2005 and have been to the Jack every year except this one. It figures I'd miss the Grand Champion award.

The team was started by Andy Husbands owner of Tremont 647, a restaurant in Boston, in 1998. The BBQ chef is Chris Hart. There are also five or six other team members and their families who attend contests as their schedules' allow. 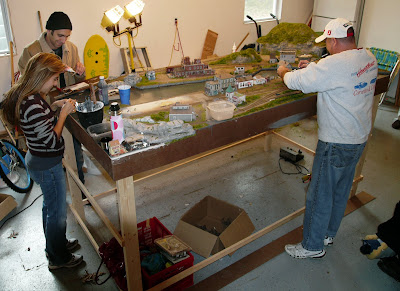 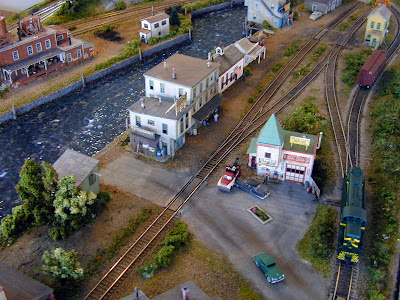 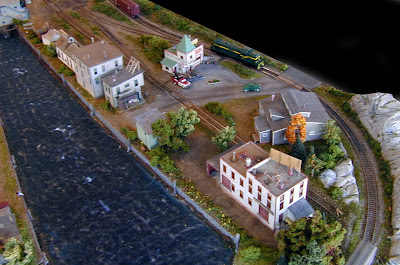 I have good intentions. I plan to post something interesting here on a regular basis. Then I forget, and go off to do something else. So I'm turning over a new leaf. My New Year's resolution is to add photos and stories on a weekly basis.
I have a lot of material. By my count I've either worked on or built 31 model railroads to date - in all scales and gauges.
I'm going to start by playing catch-up. I never finished the story of the podcast layout. If you read back through my posts you'll see that it was a 4' by 8' layout built for display at the Craftsman Structure Show in November 2009, and then presented to a lucky ticket buyer at the show. The money raised from the ticket sales, over $4,000.0, went to the Avon Breast Cancer Walk.
Posted by Dave at 5:40 AM No comments: